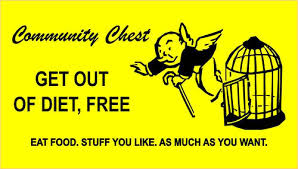 first encountered the term “Diet Jail” in 1975. I was a biology major at Clark University in Worcester, Mass. I remember clearly working with the lab teacher who was doing his research on birds (he kind of looked like a cool woodpecker). He made me count bird chirps he had taped on a recorder. I decided I did not want to be a biology major because counting bird chirps was incredibly boring. So I met with my adviser who asked me what I was interested in. My best friend Joyce was a vegetarian and ate very interesting things such as yogurt with sunflower seeds and honey, and so I told him, I though vegetarianism was interesting. He told me I should be a dietitian. I did not know what that was, but anyway, I ended up transferring to the University of Connecticut to study nutrition. For my first nutrition class (Nutrition 101) I had to do a  report about fad diets and at the time there were many books out there on the market, including the Atkins Diet. But I found one called “The Psychologist’s Eat Anything Diet” by two psychologists, Dr. Pearson and his wife, also Dr. Pearson.  It changed my thinking in a way that lasted, well, forever. The authors were decades before their times in the strategies they were promoting, before we knew about mindful eating or how our bodies regulated themselves regarding calorie intake, fat, carbohydrate intake, etc. They described what they called “diet jail” where individuals who diet tend to “lock themselves up” in a jail where only the healthy foods exist. In other words, they tell themselves they are only going to eat healthy foods such as grilled chicken, vegetables, fruits, salad, etc until they lose the weight. So psychologically it is as if they “lock themselves up” in a world where only the healthy foods are available (or allowable). But outside the jail are all the other foods, the “bad” foods. The chips, cookies, ice cream, burgers, pizza, you get the picture. All the foods they have determined they are not allowed to eat (while they are on that diet). And so, most people can last a bit in Diet Jail. Yes, they get cravings, but they use their “willpower” and overcome them. Unfortunately, we now know our bodies send out very loud signals when we are not getting enough carbohydrate or fat (the foods that do not exist in Diet Jail!) and so eventually, our bodies drive our brains to give in. Add this physiological drive to an environmental trigger, such as walking into your friend’s home who just baked some homemade chocolate chip cookies, and things change. Your brain, which is triggered by the deficiency in your body, tells you to eat a cookie! It has just what you need, what you have been missing, that fat and carbohydrate! But you can’t have someone throw just one cookie into your jail cell, so you have to step out of the jail to get that one cookie…….the problem is, once you take that bite, your realize you are out there! Out of Diet Jail! And since you know you will go back in (you tell yourself that on Monday you will really start again!) you better eat while you are out here! So you decide to order pizza, and then have ice cream (a lot) because, heck, you are going to start again on Monday. Often a full blown binge results. Because you know this is just this one time. Soon you will be back on track. Back in Diet Jail. Until the next time.

As repetitive as this cycle is in so many people’s lives, they do not seem to stop. The next diet craze offers the next magic scheme. Weight is lost and then regained. Back then we did not know the physiological reasons people were driven to eat but now we do. We know if you restrict you will suffer from “disinhibition” or breaking out of Diet Jail.Often referred to as the “what the hell” effect. It is a very sad and draining cycle.

So why not take those bars down? Why not entertain the thought of changing what you have been doing that is not working? What if you were to start to believe that all foods are equal? No food is good, no food is bad, they all have a place in your life. Yes, we need certain nutrients to feel good, have energy, normal bowel movements, prevent disease, etc. So educate yourself (I will gladly help you!), experiment, enjoy your cultural traditions (yay. pasta fagioli!) but start paying attention to your body. Are you hungry? Are you full? Are you so confused that you might really want to get some help (such as from an eating disorder specialist?). Wherever you are, it is ok, just take some time to truly reflect on your patterns. My hope for you is to enjoy eating, be healthy, and take down those darn bars.

One thought on “Are You in Diet Jail?”