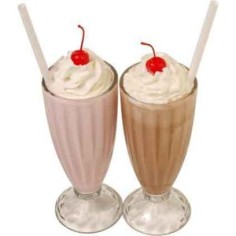 About 40 years ago, a landmark study was conducted that launched the research investigating why diets fail. This important study is sometimes referred to as “The Milkshake Study” (Herman CP, Mack D. Restrained and unrestrained eating. Journal of Personality. 1975;43:647–660). In this experiment the researchers administered a “Restraint Scale” questionnaire to determine who the dieters were (restrainers) and who the normal eaters were. They then had subjects participate in what the subjects believed was an ice cream tasting where they were to rate the ice creams. They were given either one milkshake “pre-load”, two milkshakes pre-loads or no pre-load and then told to eat as much ice cream as they wanted or needed to rate them. What was expected was the more milkshakes a subject consumed before the tasting the less they would probably eat (because they were already full, right?). But that is not what happened!

Instead, the researchers found that those individuals who were highly restrained (dieters) actually ate MORE ice cream with the more milkshakes they had before they started tasting! They hypothesized that dieters who constantly restrain their intake tend to become “disinhibited” after they break their diet boundary (sometimes referred to as the “what the hell” effect). This study triggered many more years of research into “cognitive restraint” and its negative consequences (binge eating being one).

Unfortunately, most people are not aware of this vast body of research, and so the diet industry has been able to continue making its billions. The good news is that finally a “Non-Diet” approach to weight management has been researched and proven to be effective in promoting health. Keep posted for more information and resources to come!!!

3 thoughts on “The Milkshake Study”